GRAHAM SHRIMP CO INC.’s instructors have traveled the world and have a rich understanding of agricultural environments as well as natural elements. With our services, an instructor will visit your land to get a better understand your area's soil and weather conditions. From there we'll determine how to change your seeding methods for improved harvest.

Bayou La Batre, Ala., is a land of opportunity fueled by the bounty of the Gulf of Mexico, as Ernie Anderson and his father-in-law Steve Graham of Graham Shrimp Co. Inc. will tell you after four generations of success in the shrimp and seafood processing industries. Through hard work and honest living, the faces behind Graham Shrimp have made a name for themselves both locally and nationally by catering to customers’ needs, making smart investments and simply doing good old-fashioned hard work.

Their story begins in the 1940s, when Steve’s parents Mr. Willie (Louis Wellington Graham) and Mrs. Olivet Graham traveled to Mobile from Coden, Ala., by train, selling crabmeat to long lines of hotel patrons who were mostly from the northern U.S., at the Rolston Hotel. Olivet was known as a tough woman with a particular skill for picking crabmeat, who passed that the skill on to countless others. A former Collier of Dauphin Island, Olivet had already dipped her toes into the industry, having also worked in a shrimp and oyster cannery.

On one of their trips, Mr. Willie and Mrs. Olivet struck gold when they encountered a friend, a salesman for a car lot in Mobile. The man told Willie he’d probably be able to “get around more quickly and sell more crabmeat” if he had a truck. The only problem was that Willie didn’t have a driver’s license. So the enterprising car salesman helped Willie acquire his driver’s license, and the rest is history. Also, it was at this time that Louis Wellington Graham became legally known as Willie Graham, since his friends and others had always known him only as Willie.

Ever the forward thinker, Mr. Willie became a pillar of Bayou La Batre when he “went out just like Columbus” and pioneered the harvesting of brown shrimp from the Gulf of Mexico around 1947 or 1948 on his boat, Morning Star. Exploring Lake Bond, Mobile Bay and beyond, Willie’s discovery of brown shrimp farther into the Gulf revolutionized the shrimp industry, adding a bountiful new variety to the white shrimp product already available.

Willie’s company functioned as a cannery until 1963, when the industry made a shift to frozen shrimp. The company was actually situated where Dominick’s Seafood is today, as Dominick Ficarino’s (of Dominick’s Seafood) father, Mr. Fic, married Steve Graham’s sister, Barbara, and so began Mr. Fic’s, and thus Dominick’s journey into the seafood industry of Bayou La Batre.

Ernie Anderson made his debut with Graham Shrimp after moving to Mobile in 1986, having worked in the bail bond and bounty-hunting businesses since 1983. (Incidentally Ernie still has the bail bond and bounty hunting business.) It all began when one day he helped Mr. Steve Graham take a “wheel” (propeller) off of a boat. He got an introduction to the industry, and with the help and guidance of Steve, Ernie began a route selling Bayou La Batre seafood into Dallas, Texas. That relationship led to meeting and ultimately marrying Terri Graham, Steve Graham’s daughter. Ernie and Terri decided to buy Owens Seafood Market from Steve, and Ernie began buying seafood for the market every morning.

Ernie smiles when he says that after they bought the market, no one asked him his last name for a year, assuming he was a Graham.

“I had to get married to get my name back,” Ernie says.

In 1992, another opportunity arose as Ernie was asked to help a friend regain possession his father-in-law’s boat. Upon gaining possession, Ernie brought the boat to Steve’s brother Darrell Graham’s processing facility and dock in Bayou La Batre. Darrell convinced Ernie to keep the steel hull, 92-foot boat for production. In yet another venture, Ernie decided to lease Darrell’s fuel and ice dock in order to sell fuel, ice and other supplies.

Ernie delved into the shrimp business for good after salvaging and rebuilding another boat and serving as port captain of other boats in the Bayou La Batre harbor. With eight boats at his disposal, it was an easy decision to continue.

From there Ernie and Steve joined together with the vision of rebuilding the family business. They acquired a 1,200-square-foot building, which they expanded upon in 2008 and again in 2013. Graham Shrimp has since bought new property and has expanded to a property that includes an 8,000-square-foot processing area, a new freezer and a 1.5-million-pound cold storage facility in addition to a 1,400-foot dock facility. The hustle bustle of growth, expansion and a thriving business are evident all around Graham Shrimp Co.

Today, Graham Shrimp specializes in and is one of the largest processors in the U.S. of IQF, head-on, wild-caught Gulf shrimp, a niche product. Graham Shrimp’s proprietary process results in higher-quality shrimp with a longer shelf life. Although their niche product is head-on shrimp, Graham Shrimp also processes headless, peeled, P&D and P&D tail-on. The business base is evenly split between retail/consumer and restaurant/foodservice.

Ernie says loyalty to both suppliers and customers is key to making it in the business, and Graham Shrimp has taken great care to deliver on its promises.

“I’ve been able to survive because I’m not going to do anything that’s going to put me out of business,” Ernie says. “That advice was given to me years ago when I was offered the opportunity to own and operate my own Bail Agency at the age of 23. When I asked ‘what do I do?’ I was told ‘don’t do anything that will put you out of business.’”

Ernie says he took that to mean that if you “can’t cover the risk don’t do the deal,” and he has applied that to all of his business ventures so far.

In addition to selling a high-quality product, Graham Shrimp also makes deliveries on three regular routes each week. Customers know when to expect the Graham truck, and they can customize their deliveries. Another advantage Graham has is that they can fulfill orders not only with shrimp, but with crab, oysters, fish. This allows Graham to provide a level of customer service that has made their name well known both regionally and nationally.

Ernie has also worked with the Eat Alabama Wild Seafood marketing initiative since its founding in 2002 to help promote locally caught and processed shrimp and seafood. He has been very involved with the Wild American Shrimp initiative since it began, and he is a passionate advocate for the Gulf shrimp industry. He never stops thinking of ways to help it survive and thrive.

In the end, a series of prime opportunities and a work ethic that all began with Mrs. Olivette and Mr. Willie, have helped Graham Shrimp secure its place in the rich history of the seafood industry of Bayou La Batre.

As Ernie says, “The only people who get discriminated against down here are people who are lazy and don’t wanna work.”

At Graham Shrimp it is evident that hard work has certainly paid off.

​Shipping available to all other states through our shipping partners.

Serving Lousiana, Missisippi, Alabama, Georgia and NW Florida directly with our own fleet. 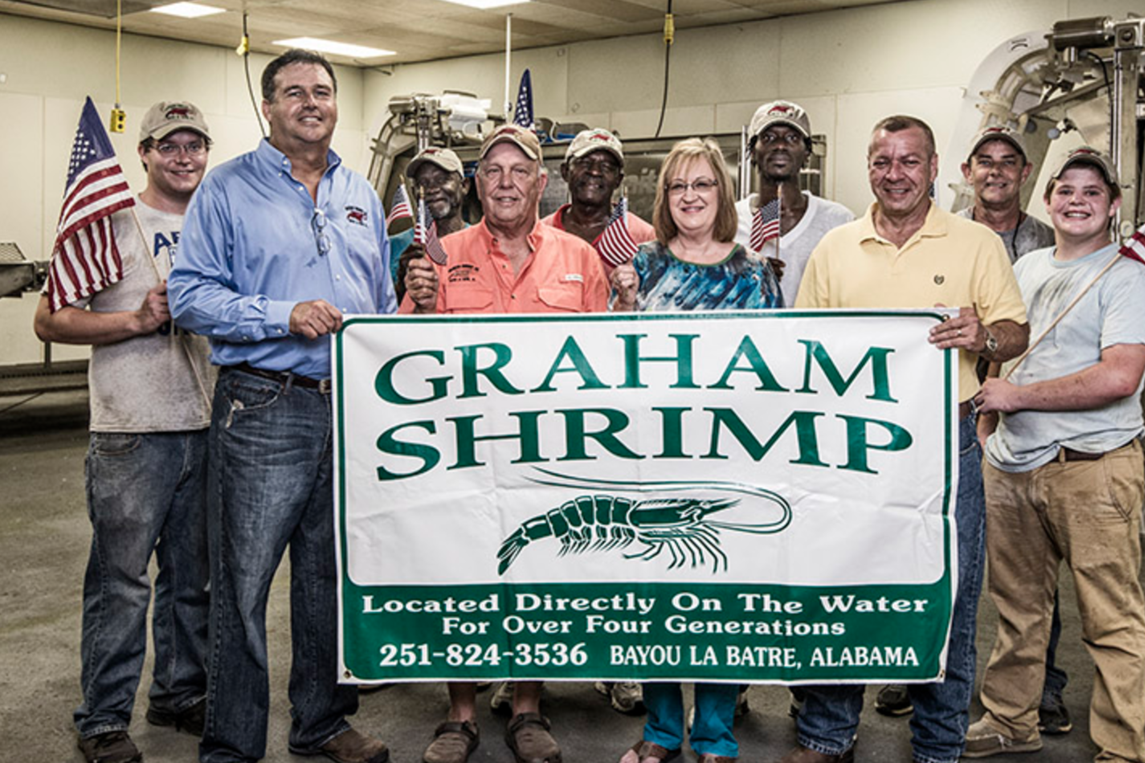